Daniel Kalman taking his kids on his bike

How long have you lived in NYC?
Only 38 years!

When and why did you move here?
I moved in 1977, when I still had hair! I wanted a piece of the action. I worked quite some time as a stage director and as a play writer. Working many hours, earning nothing. ‘Windmills’ a play I wrote, is the longest running Dutch play in NYC by the way.

What is your favorite neighborhood, why?
I just love Williamsburg because of the hipster scene. You’ll find more men in beards per square meter than anywhere else on the planet! But there are so, so many other interesting neighborhoods in all five boroughs: Manhattan, The Bronx, Brooklyn, Queens and Staten Island!

Favorite restaurant(s), why?
For the best pizza: go to Fornino’s on Bedford Avenue in Williamsburg, Brooklyn. Try the Musti Fungi variety. I have to say though; 8 million New Yorkers with 8 million different opinions when it comes to pizza 😉

Hidden gems, insider tips you think people should know about.
Little to no charge at The Metropolitan Museum! Nice little restaurants in Chinatown. Indonesian food on Flushing Avenue. The Campus of the Columbia University on Broadway and 116 West Street, 1 train. Look for the ‘Thinker’ by Rodin. The hidden Picasso statue at New York University on Houston Street and University Place. 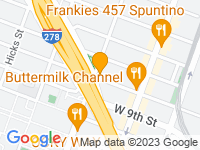